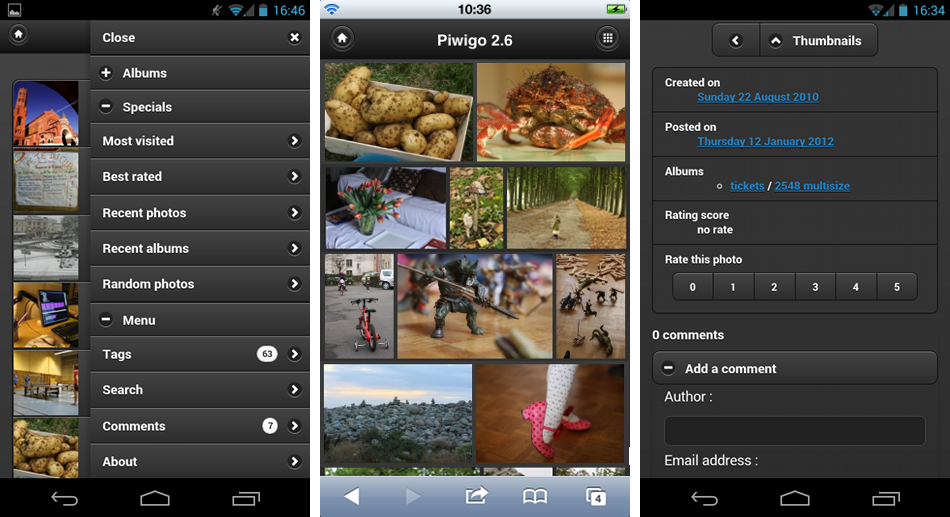 The mobile theme SmartPocket gets many new features: full menubar, search page, tags page, new layout for thumbnails and a complete page for each photo including all comments, detailed properties and ratings. 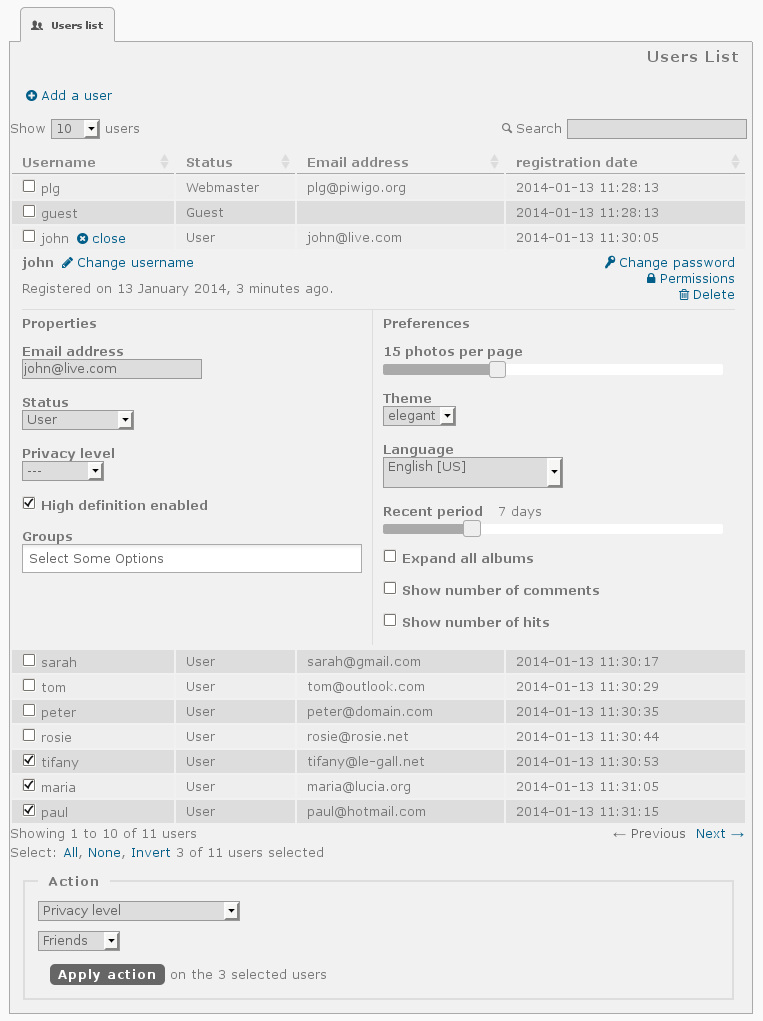 The user manager gets a new design. Full javascript/AJAX for faster actions: add user, edit each user separately or in batch.

New plugin Admin Tools adds a toolbar on the top of each page of your gallery with a set of useful functions: quick links to specific admin sections, quick edit form of photos and albums, "add to caddie" and "set as album thumbnail" buttons, development tools (identical to the MultiView plugin). 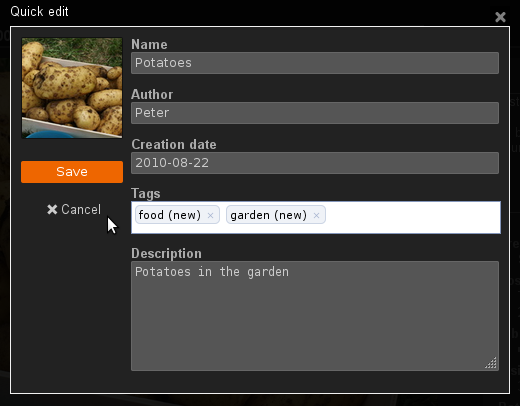 The Quick Edit form opens on the gallery page (not in administration) for quick changes to your photos and albums. It also allows non administrators to edit their own photos (uploaded with Community plugin).

Emails sent by Piwigo can either use the clear theme (as above) or the dark theme. The email theme no longer depends on the gallery theme.

Based on their IP address, find the geolocation of your visitor on page [Administration > Tools > History > Search] with an optional Google map. 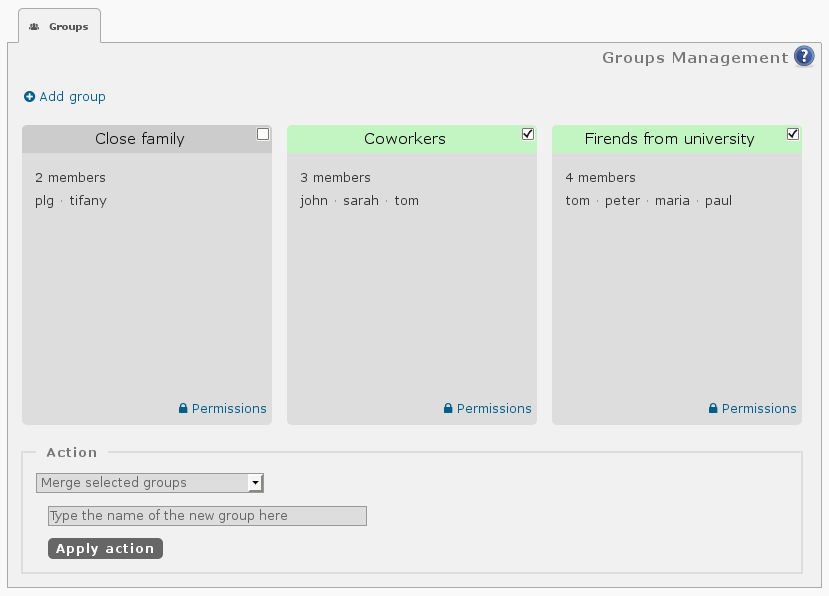 New layout for the group manager, based on the Photo Batch Manager.

New icons in the administration menubar and icons on sub-menus. Many administration tabs and links get icons too. Icons are displayed using the Fontello system and collections Font Awesome, Entypo, Iconic, Elusive and MFG Labs. Icons are compatible with high pixel density screens such as Retina and modern smartphones: whatever the zoom level, icons remain sharp and clean.

The recent photos section can't be empty anymore. Either Piwigo finds photos in the recent period (ie last 7 days by default) or it shows the last added photos.

Number of tags and comments

The number of tags and comments is now displayed in the menubar.

The new User Comment Manager lets you manage all comments, including validated comments.

Added link to "edit this album" when managing sub-albums.

Elegant and SmartPocket themes get an admin page.

On Elegant you can define the behavior of slide panels.

On SmartPocket you can define the behavior during viewing and for slideshows.

If you upload a TIFF file, Piwigo will automatically store it as the "original" version and create a PNG representative picture. Switch to JPEG with $conf['tiff_representative_ext'] = 'jpg'; in your local configuration.

Piwigo 2.6.0 adds language American English, which is slightly different from British English. 45 languages have been updated. Piwigo 2.6 supports 56 languages. Your participation is welcomed on our translation platform, for new languages, improvements and new strings to translate.

Please note that more detailed documentation is available about Technical changes in Piwigo 2.6. Please read it to make your extensions compatible with Piwigo 2.6.

Smarty, our templating system, has been updated to version 3. Usage remains the same but some cool features have been added, in particular no more need to use {literal} or {ldelim} tags when writing Javascript/CSS.

We also added the modifier translate_dec intended to replace $pwg->l10n_dec.

The l10n function has been improved: one can provide additional parameters which will be used to perform a sprintf on the string; the same change applies to the translate template modifier.

The WebServices has been considerably enhanced in this version, the main changes are :

Each parameter can be defined with a type which will be checked by the WS controller (no more need to do it in the method declaration). Available types are : WS_TYPE_BOOL, WS_TYPE_INT, WS_TYPE_FLOAT, WS_TYPE_POSITIVE, WS_TYPE_NOTNULL, WS_TYPE_ID.

The PwgServer::addMethod function can take a sixth parameter, an array of boolean options: hidden, admin_only, post_only.

The email functions have also been rewritten for better compatibility with mail readers and more features for plugin developers.
We use the PHPMailer library for all technical operations and have implemented templates for nice and customizable displays.
Additionally the new system supports secure connections for SMTP (SSL/TLS).

Piwigo 2.6 will always synchronize GPS Metadata (latitude and longitude) if the EXIF sync is activated. The data are stored in the images table, not used by the core but available for any plugin.

The translation system has been improved with fallback languages, it allow us to define a language as child of another (for instance Canadian French is a child of French). This brings better and faster translations for some languages.

jQuery has been updated to 1.10.2, the major changes are listed on the jQuery website.

jQuery UI has been updated to 1.10.1, the main change is the renaming UI effects filenames.

TokenInput has been updated to 1.6.1, the parameter allowCreation was renamed into allowFreeTagging and the location of the stylesheet changed.

jGrowl has been update to 1.2.12, the location of the stylesheet changed.

We have added jQuery DataTables 1.9.4 and underscore 1.5.2, both located in themes/default/js/plugins folder.

New simpler and cleaner way to add a new page in the public part of Piwigo: declare $page['is_external']=true; and assign your page content to the $CONTENT template variable. Template creators must display the variable on index.tpl.

In order to deal with naming conflicts we have introduced the PluginMaintain interface. It is used to define the maintenance functions of a plugin (in maintain.inc.php file) in a uniquely named class.
The same interface exists for themes : ThemeMaintain..

We decided to rename the meaningless trigger_event and trigger_action functions as trigger_change and trigger_notify. Piwigo 2.6 handles both versions but only the new ones will be kept for 2.7. No change for trigger handling with the add_event_handler function.

Now you can use Smarty functions in .css and .js files, just set template=true when using combine_script and combine_css.

In 2.5 we added two methods to sort action buttons on index and photo page. As planned, the usage changed a bit for 2.6 : plugins must not declare their buttons with surrounding <span>, <div> or <li>, as this markup is now handled by the template.