Piwigo 2.3 introduces new features like rating score, update manager and thumbnail cropping. There are enhancements to the user interface with a streamlined plugin manager and a more intelligent upload form. We have worked on keeping as many plugins and themes compatible with this new major version. Several new features that were available as plugins are now integrated into the Piwigo core.

Piwigo 2.3 in numbers: 50 new features, 600 code changes on Subversion, 6 new languages and a much shorter release cycle of 6 months.

We have changed 2 important features on the Plugin Manager:

Another minor change: only webmasters can activate/deactivate plugins. The administrator status is not enough.

The upload form has been seriously improved. Among visible improvements, you will find a simpler album selector, maximum filesize and dimensions displayed before you select some photos, the selection button is now translated in all languages, a progress bar for the whole upload and, last but not least, the photos are displayed as soon as they are uploaded, progressively. 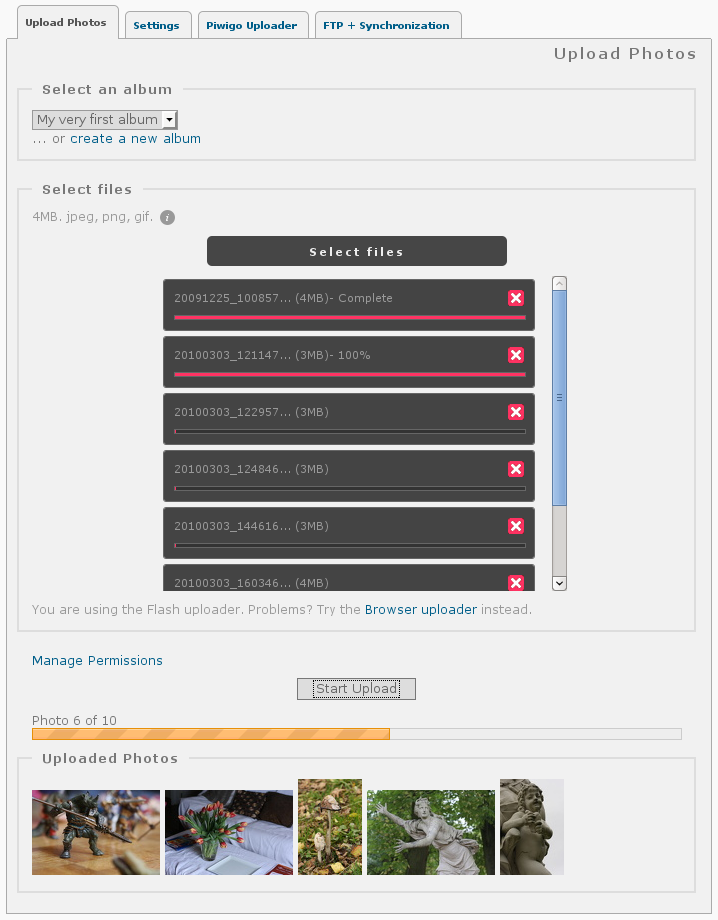 In Piwigo 2.3 we have changed the algorithm to include the number of ratings in the calculation. To avoid confusion the average rate has been renamed rating score.

We have integrated the Piwigo AutoUpgrade plugin into Piwigo. You can find it on screen [Administration > Tools > Updates]. You can update Piwigo core and Piwigo extensions (plugins, themes and languages). 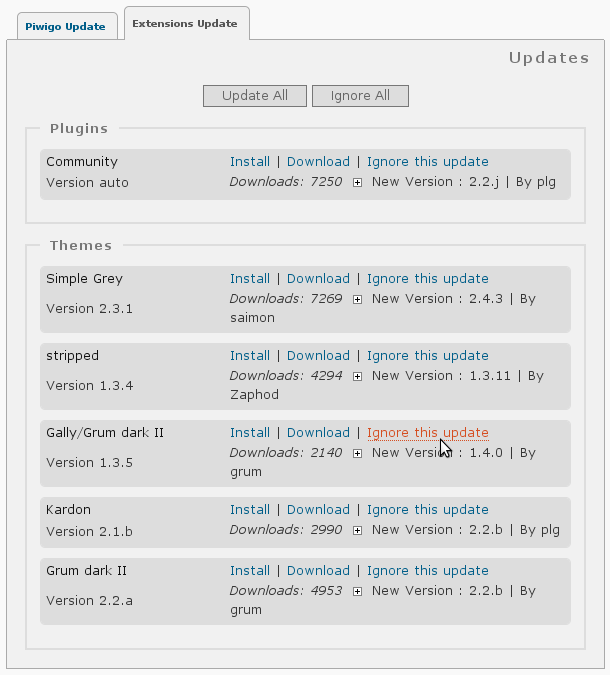 The tooltips on thumbnails have been fully redesigned, just like the alternate text ("alt" html attribute), in order to improve search engine optimization and to provide more useful information to your visitors.

Use your gallery title in your page banner

The gallery title can be used automatically in the page banner. Easy and convenient.

The "lost password" feature has been rewritten from scratch. The new feature lets administrators reset their password without directly accessing the database. 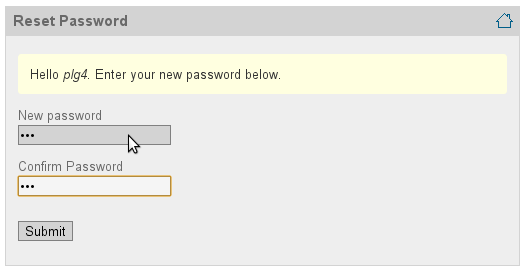 Menubar on all pages

The menubar is visible on all pages including the tags, profile, comments and registration pages. 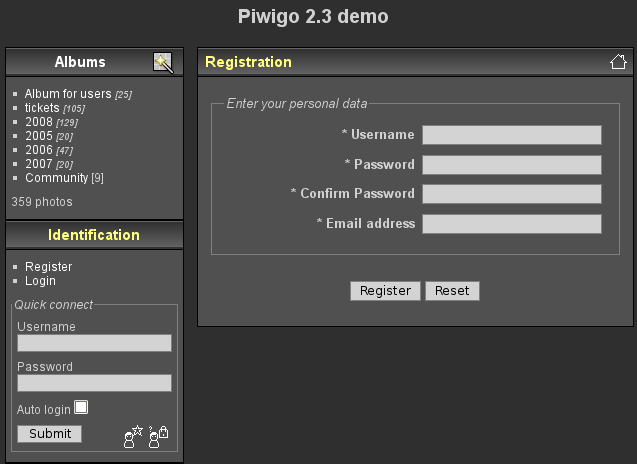 You can merge tags without losing associations with photos.

The ability to regenerate websize images and thumbnails has been added to the Batch Manager.

When regenerating a websize image Piwigo will create it by default from the HD (high definition) version of your photo. If no HD image is available and if the current websize is bigger than the resize dimensions, Piwigo will treat it as HD and create a downsized websize photo from it.

The ability to crop thumbnails has been added to the Batch Manager. You can create square or wide thumbnails now with no need to install a plugin.

You can now manage the default sort order of your photos without writing any SQL code (Advanced users: you can still overwrite the parameter in your local configuration file)

You can apply the permissions of a parent album (for example, Parties) to its sub-albums (Parties / Christmas 2011 and Parties / Happy new year 2012).

Is your gallery available in English, Spanish, French and German? Nearly all labels are multilingual using the Extended Description plugin, from photo description to album name and including the page banner. Now you can also have multilingual tags.

All multilingual tags will also appear in the auto-completion list when you are adding tags to a photo.

Number of photos per page

The gallery URL parameter was moved

From the administration screen [Administration > Configuration > Options > Main] to the local configuration file that you can edit with plugin LocalFiles Editor. The parameter name is $conf['gallery_url']. It was removed from the user interface because this parameter may be dangerous without correct understanding of its usage. Many users think that by changing this URL, they will either get a new domain name or have their homepage elsewhere, which is just not true and misleading.

Reminder: the $conf['gallery_url'] parameter changes the destination of the Home link everywhere in the gallery.

43 languages, out of the box 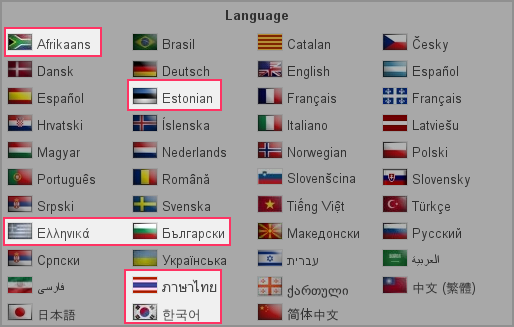 That's a huge effort from our translation team. In addition to new languages, we have recently introduced an online translation tool created by our newest (and youngest) core team member, mistic100. 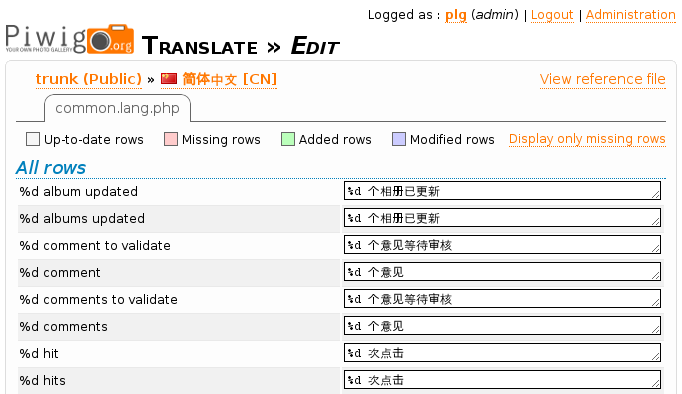 Support of PostgreSQL and SQLite was removed

Since Piwigo 2.1 released in May 2010, Piwigo had experimental support for PostgreSQL and SQLite.

In practice, some bugs were reported on SQLite/PostgreSQL and were not always fixed. This support brings additional constraints for coding and nearly all plugins using database are only compatible with MySQL. People interested in Piwigo for PostgreSQL/SQLite support were disappointed because the feature was buggy and incomplete.

Consequently we have decided to remove support for PostgreSQL and SQLite and focus on MySQL moving forward.